Have you heard of Captain John M. James? He was a British Captain, born in Penzance in 1839, who went to Japan to teach navigation skills. His accomplishment greatly contributed to the Japanese Navy and he became known as ‘The Father of the Japanese Navy’. Curiously, there was something unusual and special about him: he was a devoted Nichiren Shu Buddhist.

Having sailed to many countries in Asia, on the return journey from his first visit to Japan, in 1860, Captain James, together with two Japanese politicians, had a fateful passage on his way back to Britain. They encountered a storm and their ship was unfortunately wrecked off the coast of Hong Kong. This incident led him to a turning point in his life. First, he decided to settle in Japan permanently. Second, it was during this event that he met and became friends with Mr. Yoshiomi Seki, a Japanese politician. Having survived the wreck off the coast of Hong Kong, on the journey back to Japan, a life-long friendship was formed. It is said that Mr. Seki later taught Captain James Nichiren Shu Buddhism. 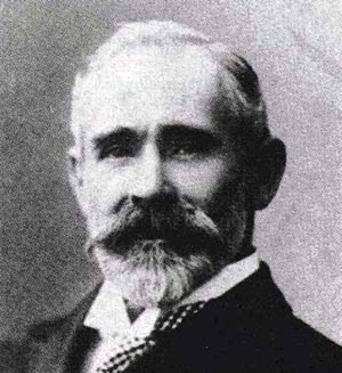 In Japan, Captain James advised the Japanese Navy and he also contributed to the development of Japanese Civil Marine Affairs. In 1890 he received a permanent annuity and the following year he received an honorary medal from the Japanese Government.

A gentle and caring man, he didn’t have children of his own, but he took care of the children in the neighbourhood of  Tokyo where he lived. He made large donations to a local elementary school so that a new school building could be built. He gave the local children food and pocket-money. Without his knowledge, he had been called ‘Santa Claus’. He was very popular and respected by many people.

Beside his house in Tokyo there was a very steep slope which was called ‘Sengen Zaka’. Local people were inconvenienced by this slope and had trouble getting up and down it when going about their daily business. As soon as he found out about this, he spent his own money and had the steep slope reconstructed so that it was a more gentle gradient. After that people began to call the slope ‘James’ Slope’, and after some time it became the official name instead of the original name ‘Sengen Zaka’. This name was never changed, even during an antagonistic campaign during WWII when western place names were being removed.

He had visited Asian countries which European countries had tried to colonize, and he had met Christian missionaries, but he could not accept the actions of the Christian missionaries. To him, they seemed like the vanguard of European countries wishing to expand their own colonies with unscrupulous means. He then encountered the teaching of Nichiren Shu Buddhism that, “All living beings have Buddha nature”. He was attracted by this peaceful teaching and, after receiving more teachings from Nichiren Shu Priests he converted to Nichiren Shu. He ordered a solid gold statue of Śākyamuni Buddha, chanted every morning and evening, and deepened his faith. It is said that his chanting of the Odaimoku, “Namu Myoho Renge Kyo” and the Lotus Sutra could be heard throughout the local neighbourhood.

In 1908 his life ended when he was age 71. His funeral was held at his home, and was directed by the 78th Hosu, the spiritual leader of Nichiren Shu. Three days before he passed away, he left a special request in his will “to please cremate my body and store my ashes in Mt. Minobu.” He chanted the Lotus Sūtra before his death and he meditated for a while, and then passed away peacefully while he was chanting the Odaimoku. Following the request he made in his will, his grave was erected behind the Head Temple, Kuon-ji, on Mt. Minobu. His was given the Buddhist name was “East Seas Inn Royal Devoted Righteousness Nation Sunlight Great Lay Minister”.

One seafaring man who came from a small town on the South Coast of England chose Mt. Minobu in Japan, the spiritual mountain where Nichiren Shonin lived for the last part of his life, as his final port of call.

View all posts by nichirenshuuk

2 thoughts on “Who was Captain John M. James?”